In partnership with the Aquarium of the Pacific, we learned how to channel the power of storytelling into communicating impending environmental issues.

One ocean under threat.

keyboard_arrow_up We listened to scientists & experts in the field

We also shared experiences of our own keyboard_arrow_down

More than 10,000 species are at risk of extinction every year, among them a swelling number of marine animals.

Humans have profoundly decreased the abundance of both large (e.g., whales) and small (e.g., anchovies) marine fauna. Such declines can generate waves of ecological change that travel both up and down ma­rine food webs and can alter ocean ecosystem functioning. Climate change threatens to accelerate marine defaunation over the next century.

Wildlife populations in the oceans have been badly damaged by human activities.

We may be sitting on a precipice of a major extinction event.

We should act quickly to slow the advance of marine defaunation.

Doubling down on diamonds.

Since we would be meeting with clients on a bi-weekly basis, we decided early on in the process to utilize the double-diamond methodology into our process. 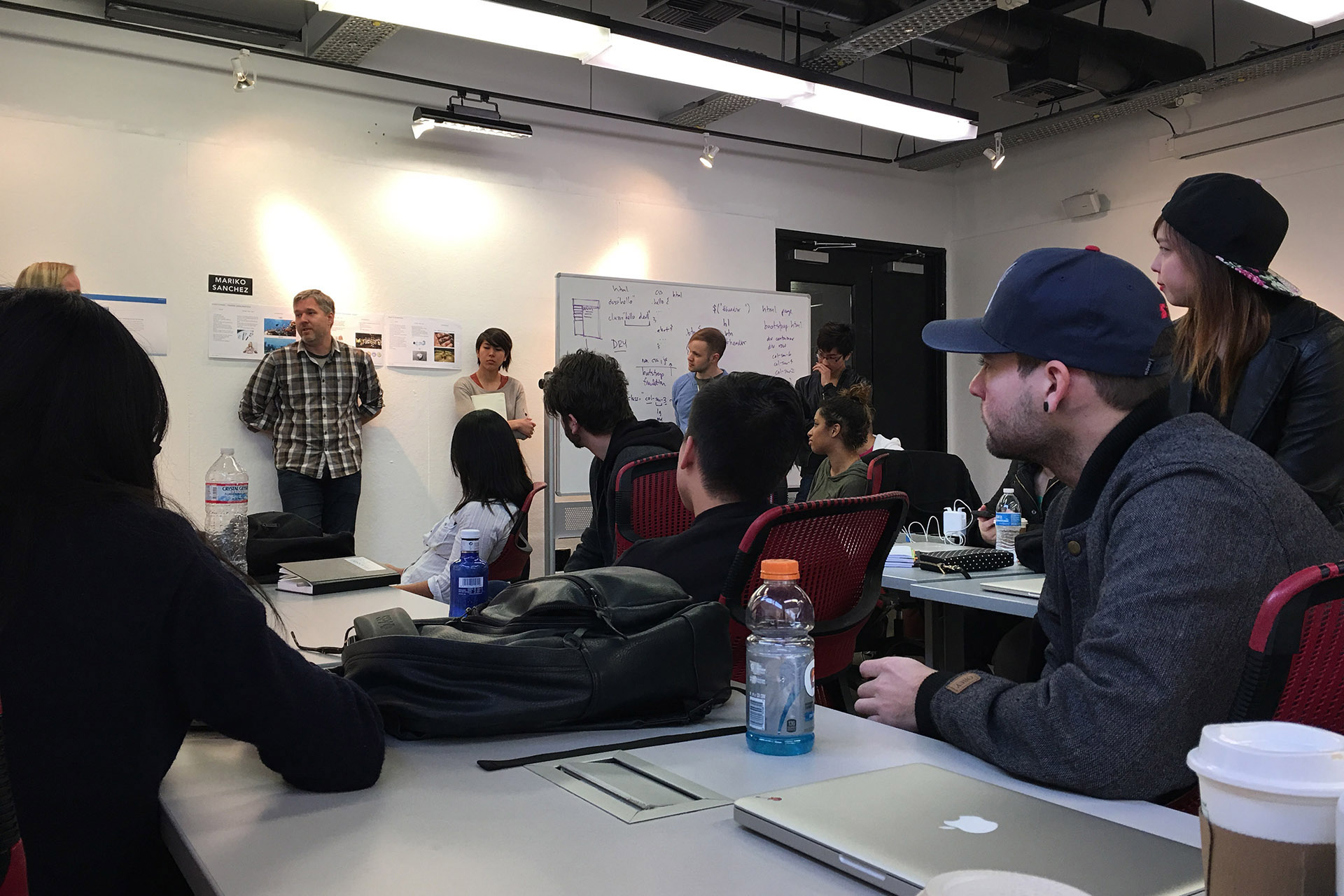 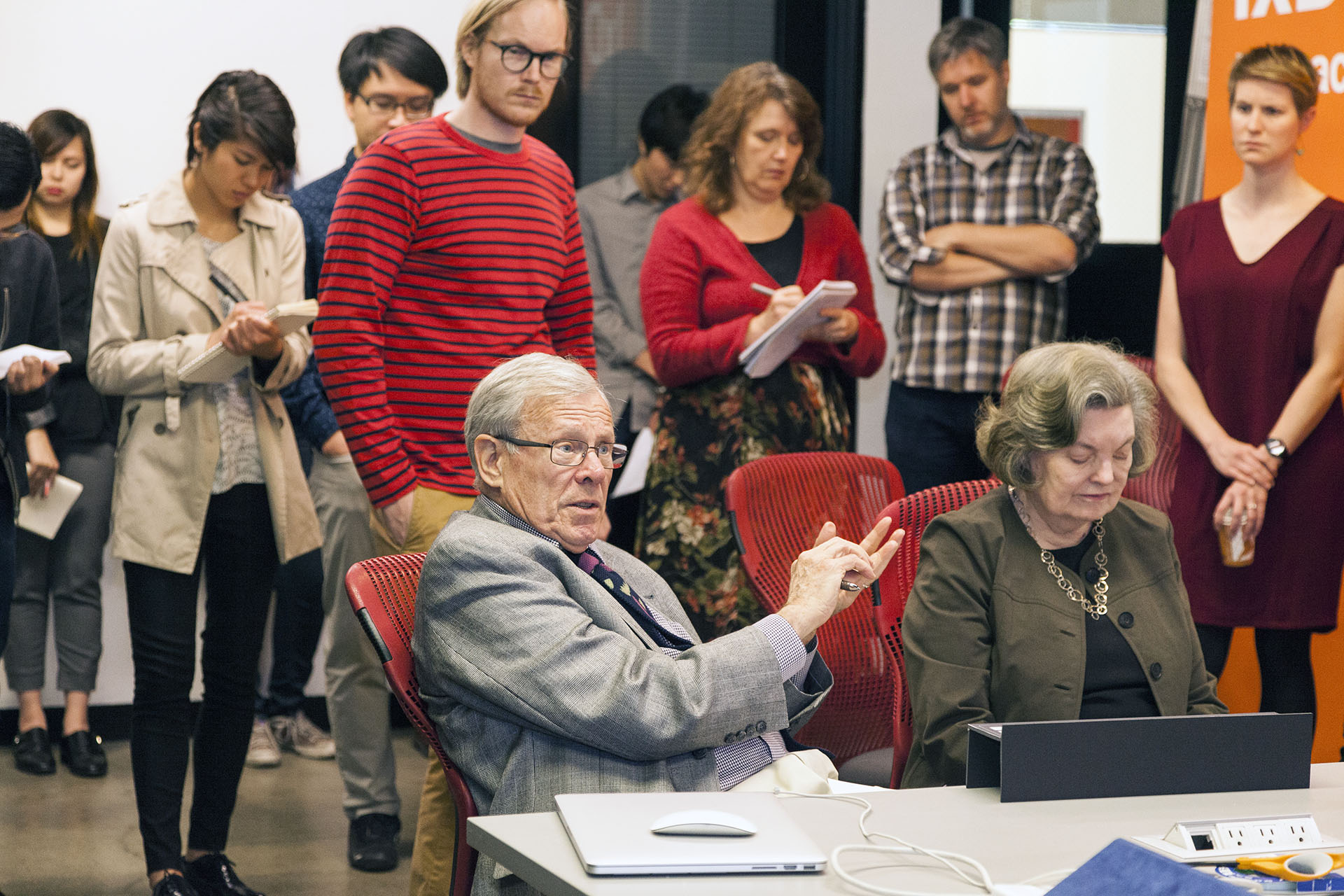 This involved rapidly generating lots of different ideas in the initial phase; then, with feedback from the client, we would continue to refine and filter down to surface more potent ones.

Meet and greet with scientists and experts. 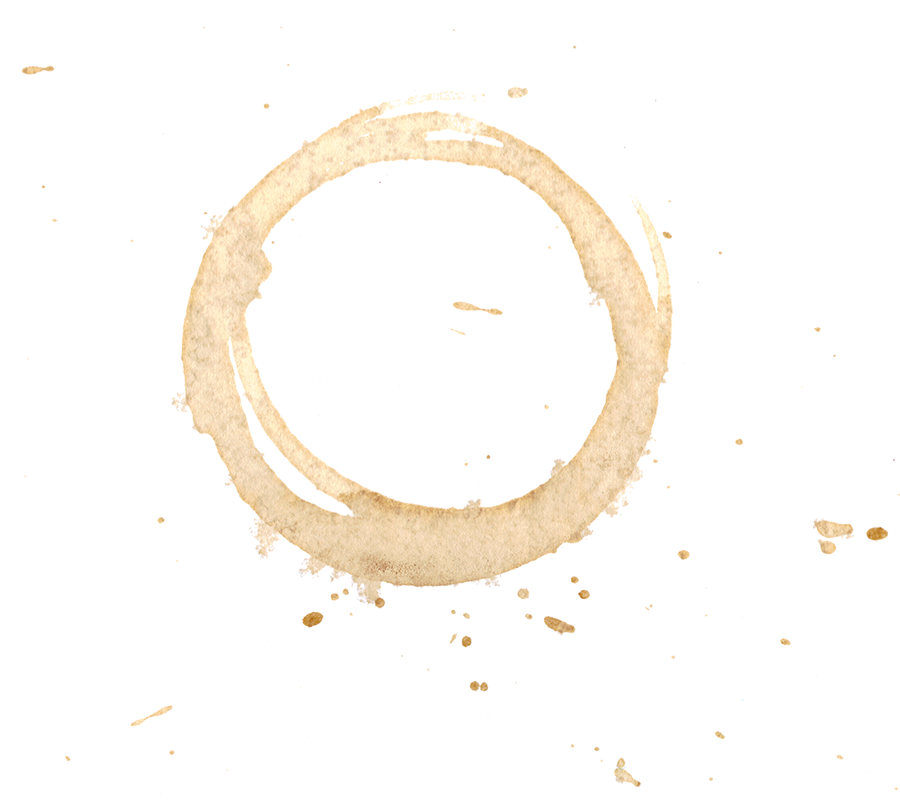 Within the fast-paced and iterative creative process, we established a clear goal and set design criteria for the project for the weeks to come. These guides, though simple, often came in handy for re-evaluating our concepts.

via an engaging and memorable interaction.

A story of great recovery.

Instead of capitalizing on the tragedies, we chose to tell the humpback whales’ great comeback story, notably during the last 40 years.

Their resilience and a strong recovery in population is proof that a coalition of international policy-making efforts and collective human activism can make a big difference. 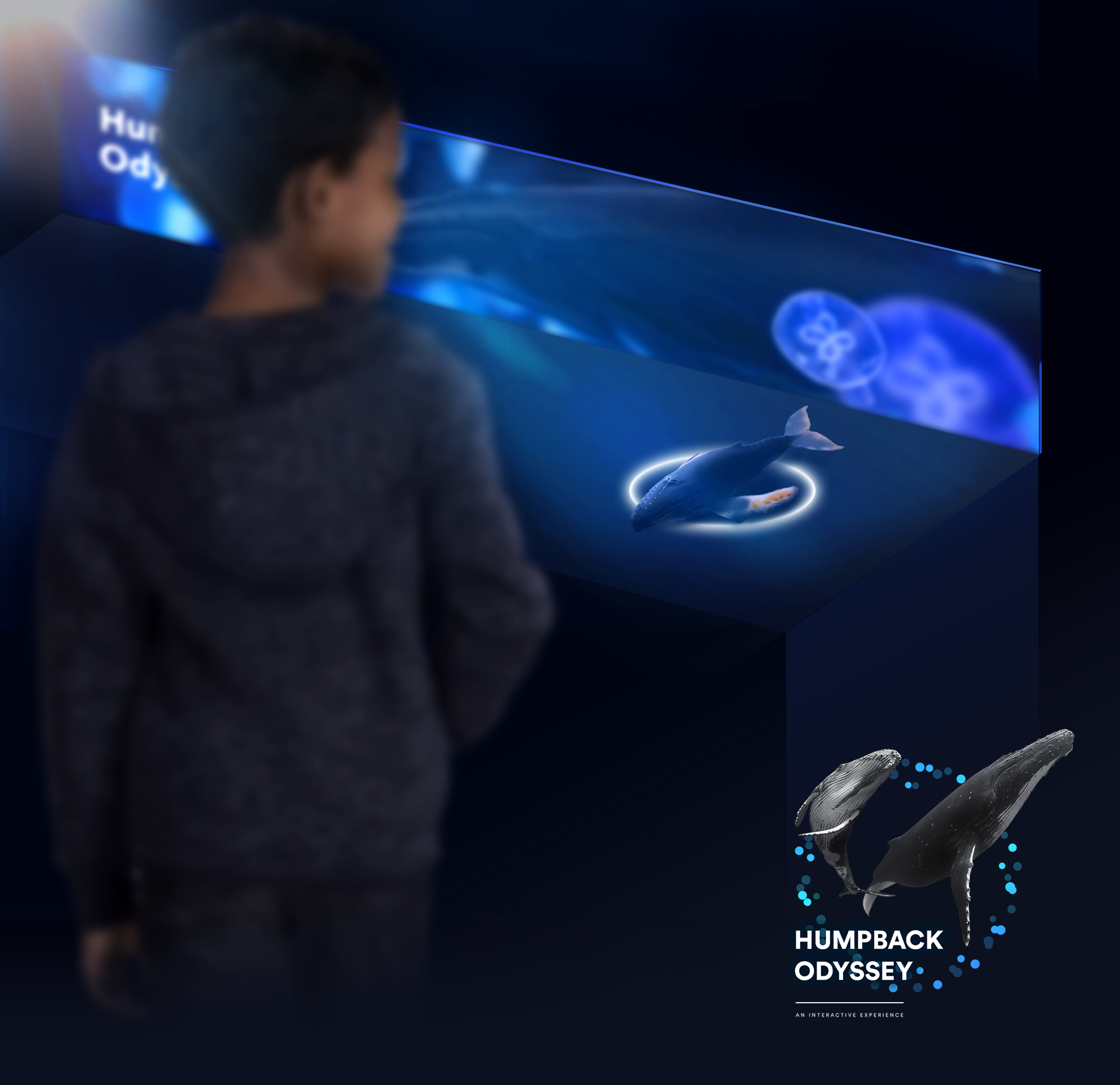 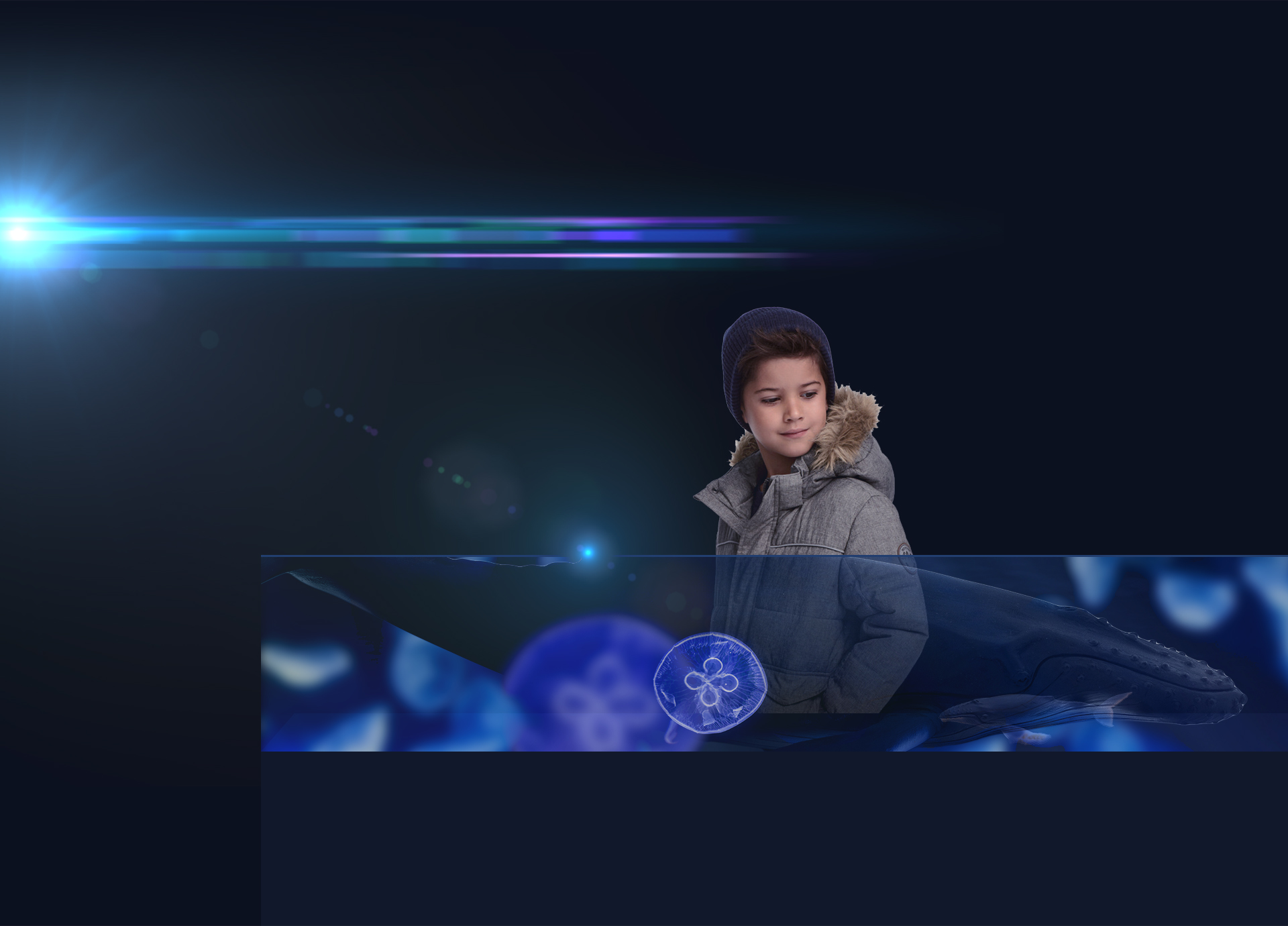 After a few iterations, we found out that the optimal form factor consisted of two planes conjoined at an angle equal or greater than 90 degrees.

To accomodate both adults and children of small sizes, the angle of the joint would become more dramatic as the bottom plane moved closer to ground. Hollowing out the supporting structure for the bottom plane was also considered for better wheelchair support.

The setup is perfect for a shared experience in which the parent assumes the co-pilot position while the child is the main driver of the narrative.

keyboard_arrow_up Control the timeline with an animal figurine

Learn about the species’ history keyboard_arrow_down

Crude and humble as it was, our first prototype served beautifully as the first foray into the heart and mind of our users.

Upon seeing users interact with the mockup, we believed we had found an intuitive way to communicate our story.

We quickly assembled another prototype consisted simply of color-coded post-its so our users can begin sorting data into various ‘tiers.’

These user-generated data groupings became ‘hotspots’ — the underlying foundation upon which we built our interactive timeline. 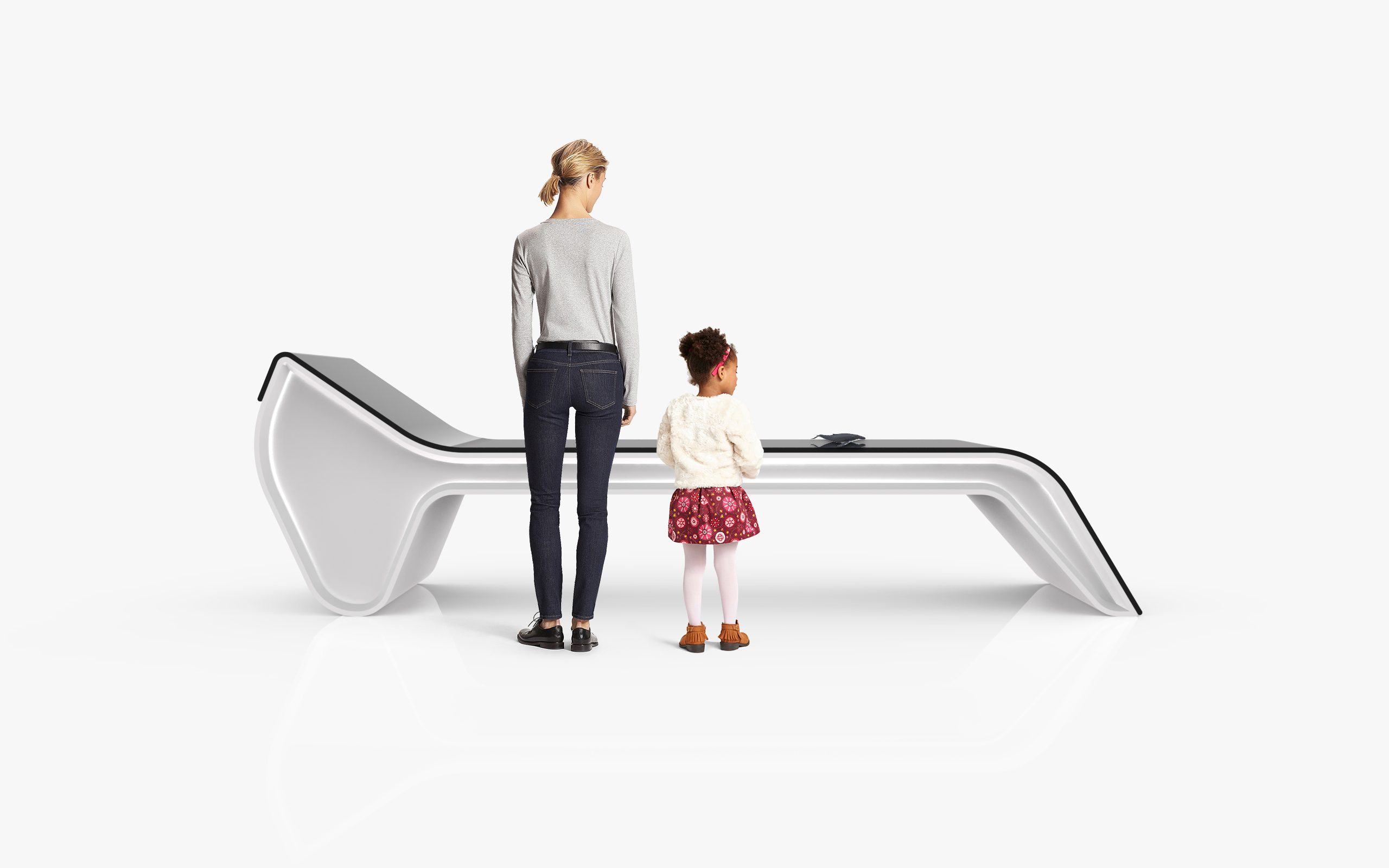 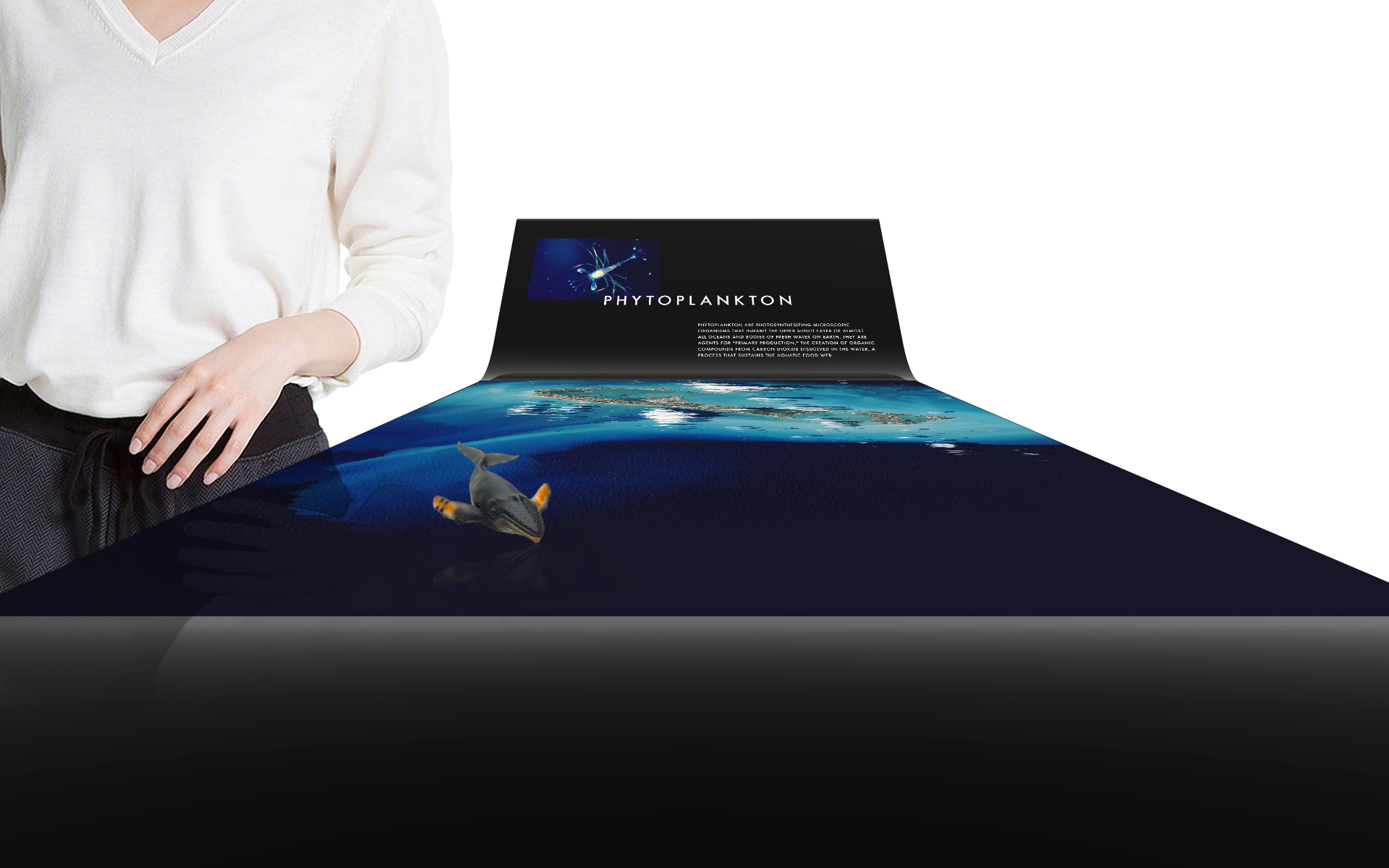 The latest iteration of our prototype bore a striking resemblance to that of an arcade or pinball machine.

No wonder why we'd been getting a lot of curious questions from passerby’s when we're building it. 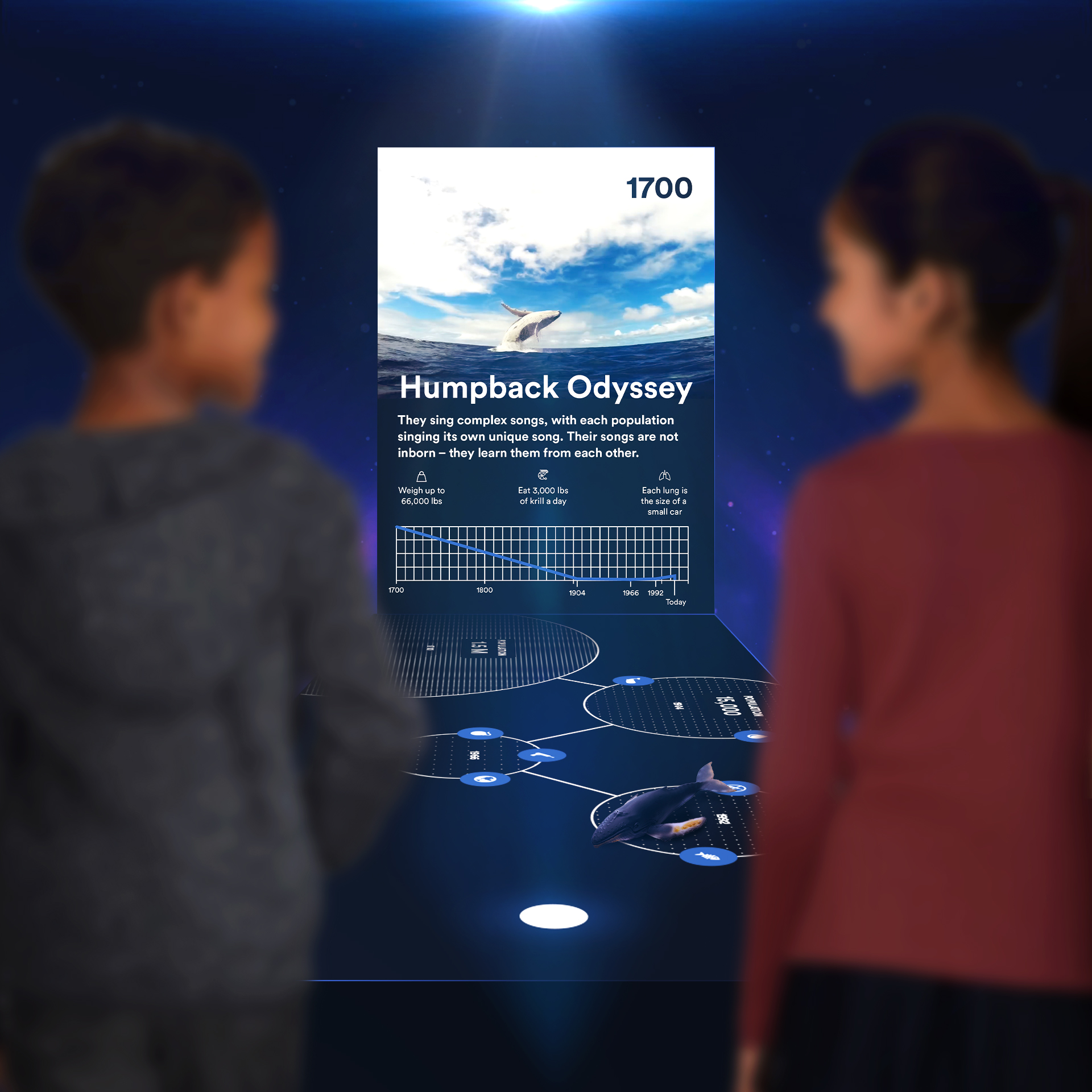 Touching an actual object stimulates different regions of the brain, making the experience more memorable than being told a fact or simply staring at a screen.

To a child’s mind, the toy whale has the potential to become so much more than what meets the eye.

keyboard_arrow_up Picking up the figurine

Placing it onto a hotspot keyboard_arrow_down 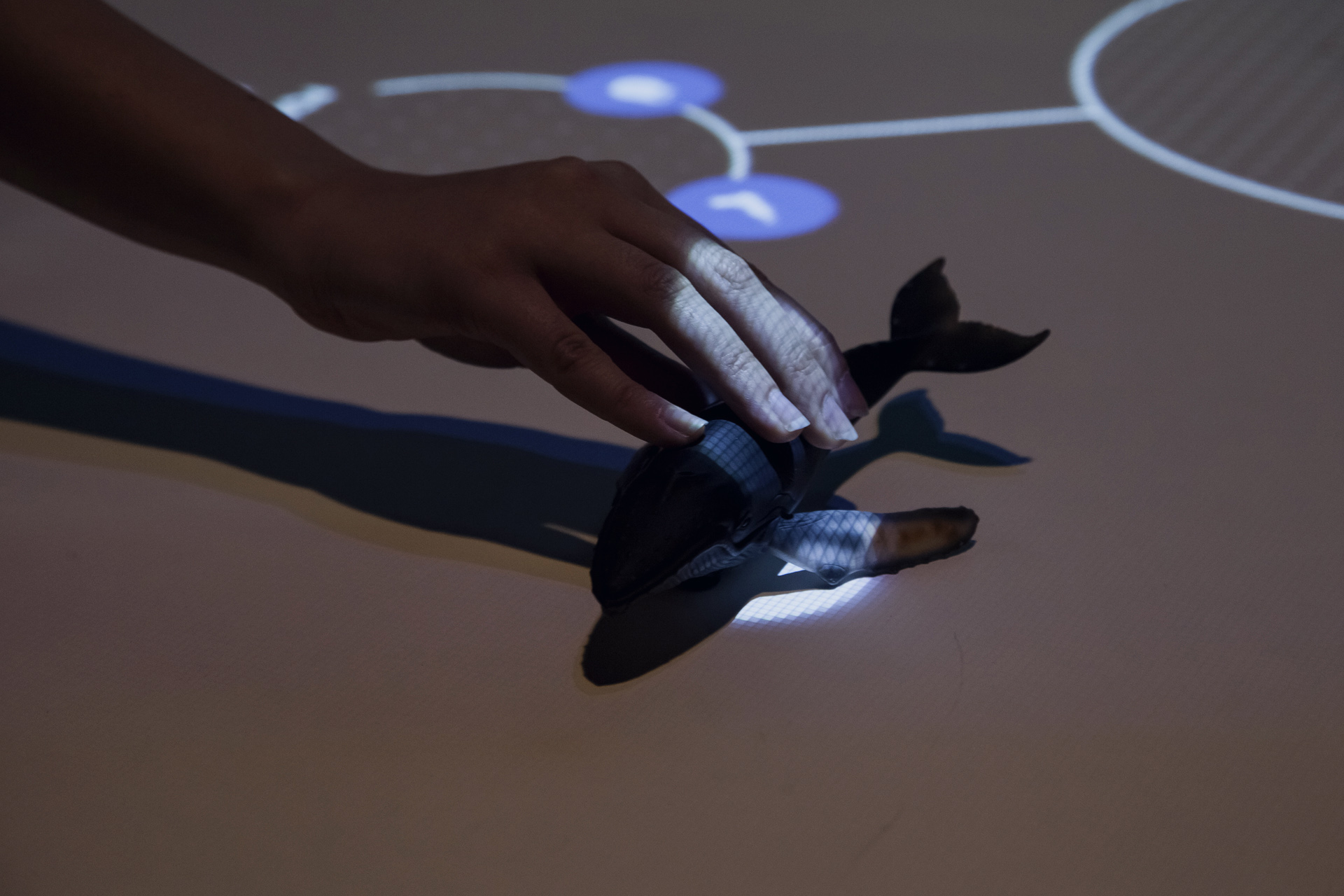 keyboard_arrow_up User activates hotspots by placing the figurine over them 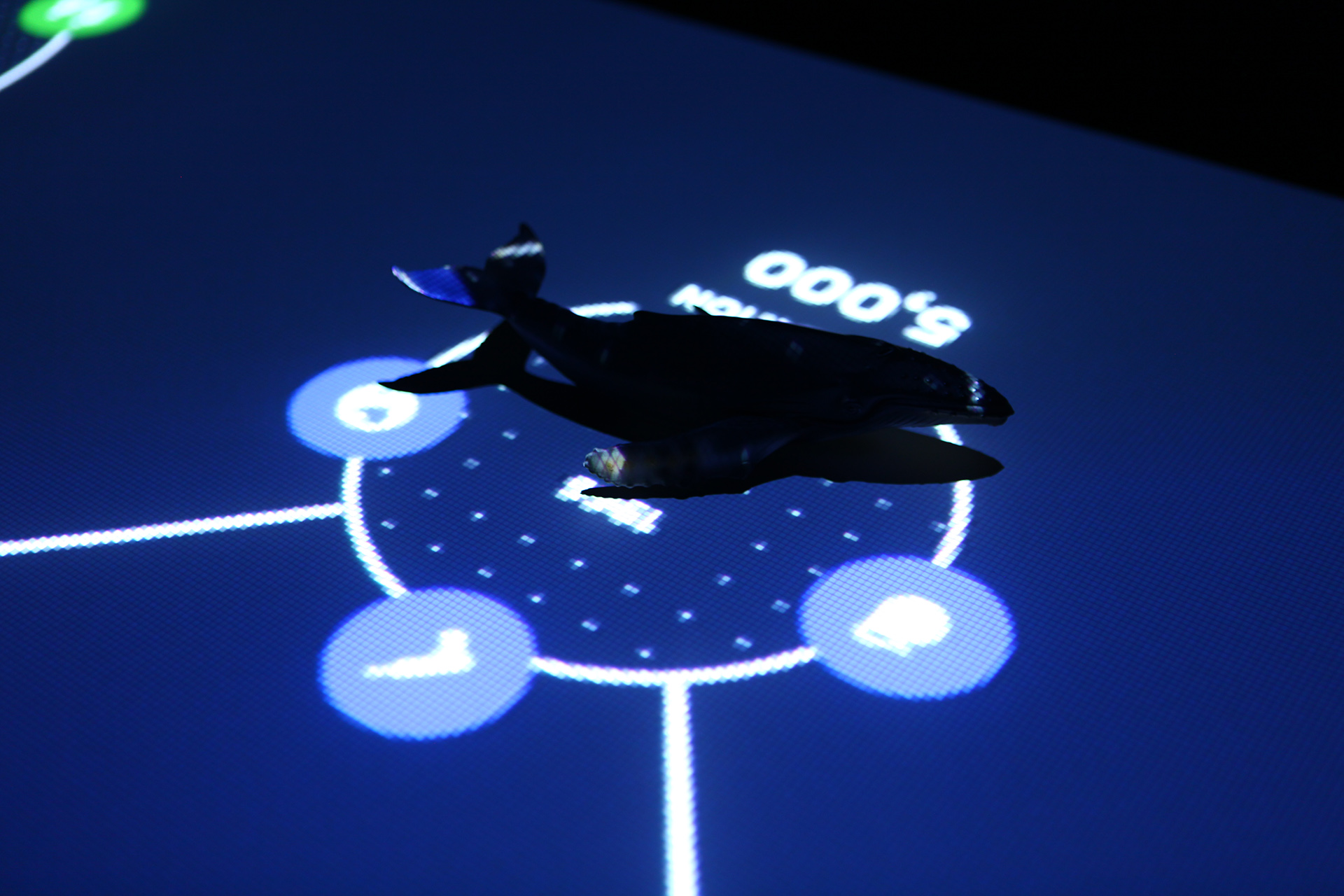 keyboard_arrow_up User can make choices which will lead to different outcomes 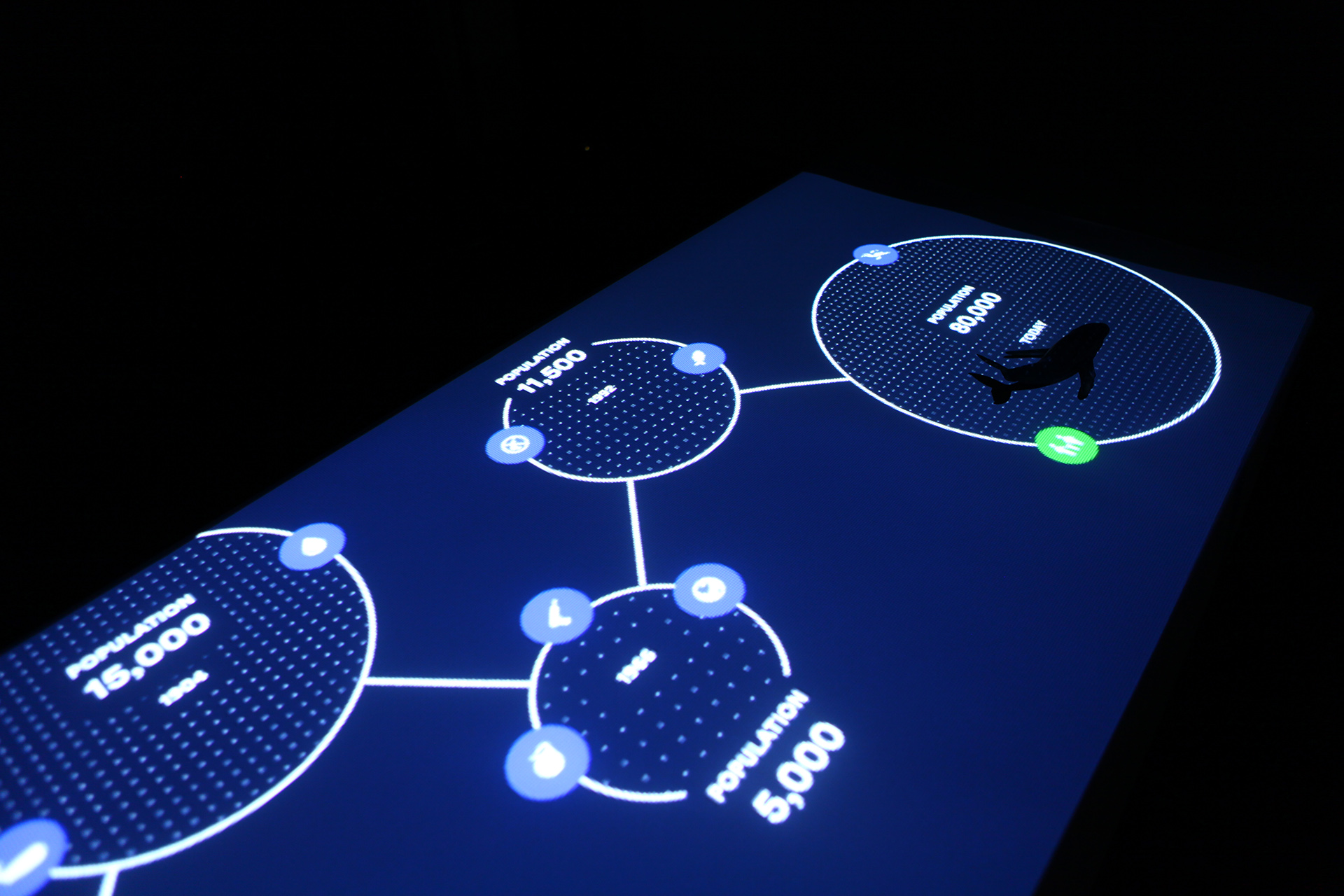 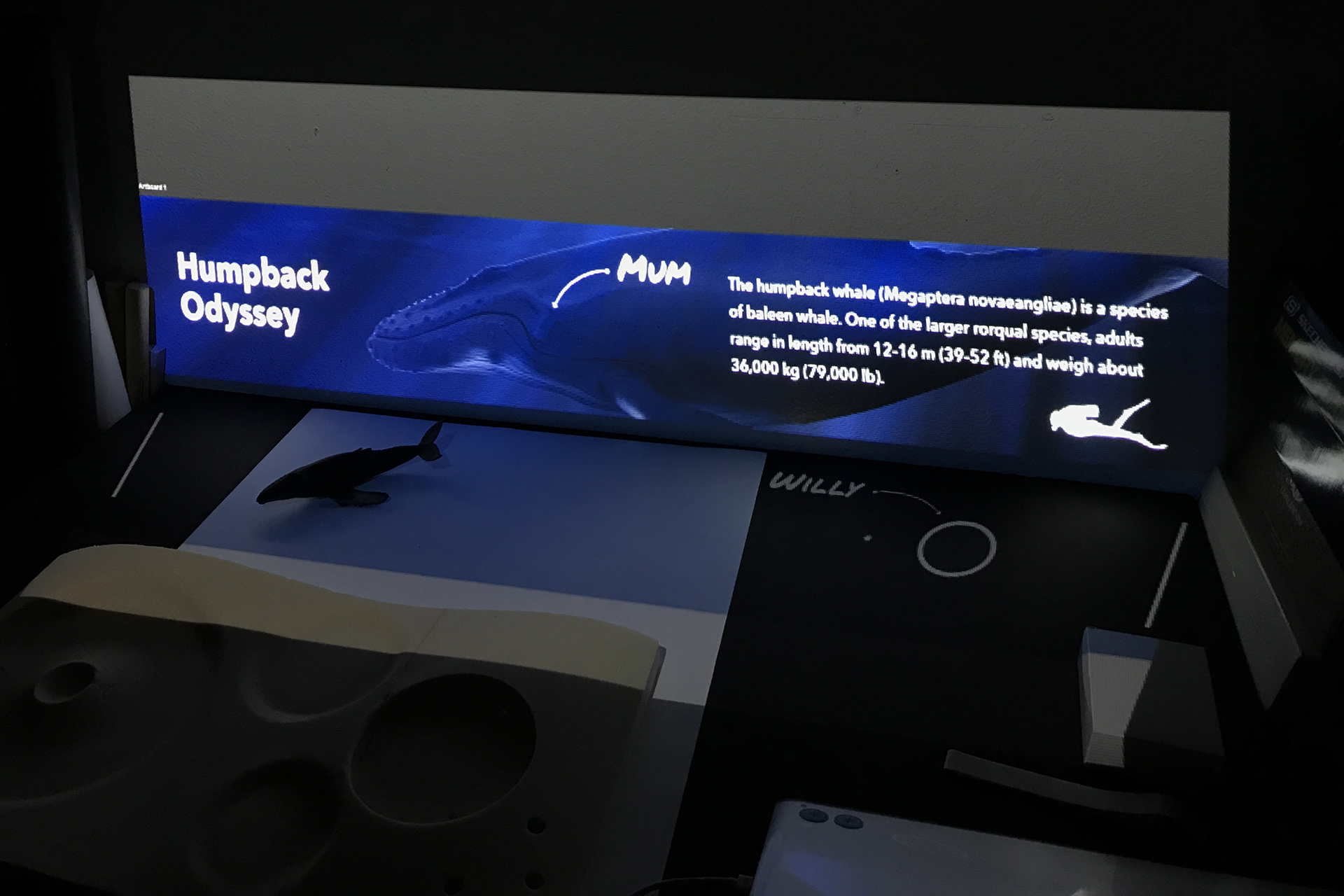 keyboard_arrow_up To arrive at the specs that worked, we had gone through several iterations of the prototype

PreSense is a network of magnetic sensitive sensors (aka Reed switches) that captures the X and Y coordinates of a magnetically-charged object on a plane and reports the numbers back to an embedded computer.

Projection Mapping The onboard computer processes the object's coordinates and render out the corresponding graphics, which get projected back onto the plane on which the object is placed.

We created several prototypes to explore the desirable interaction. 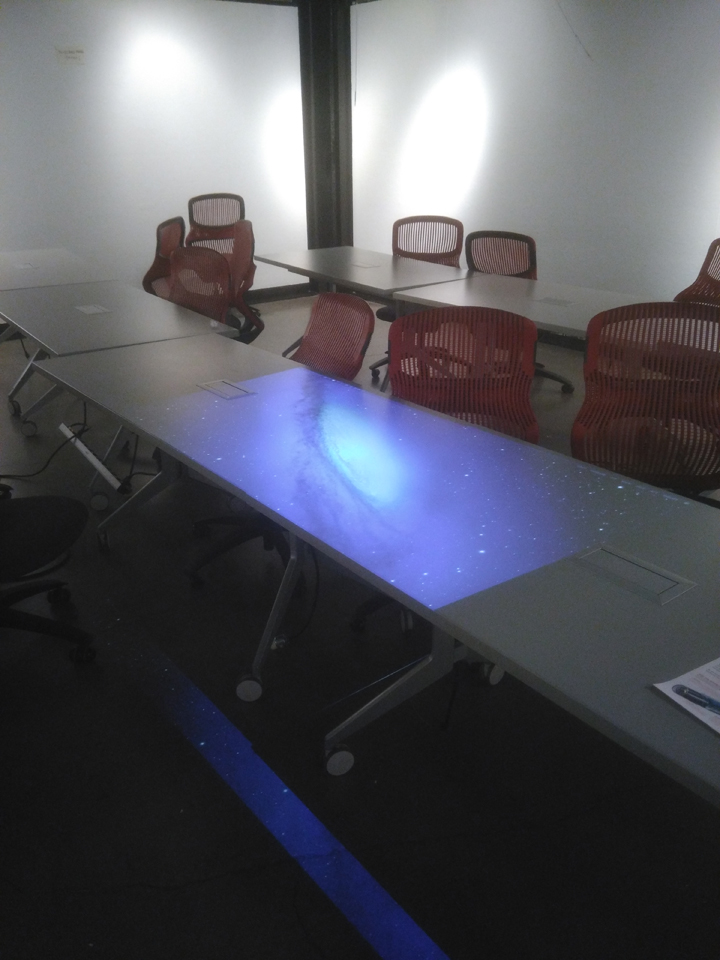 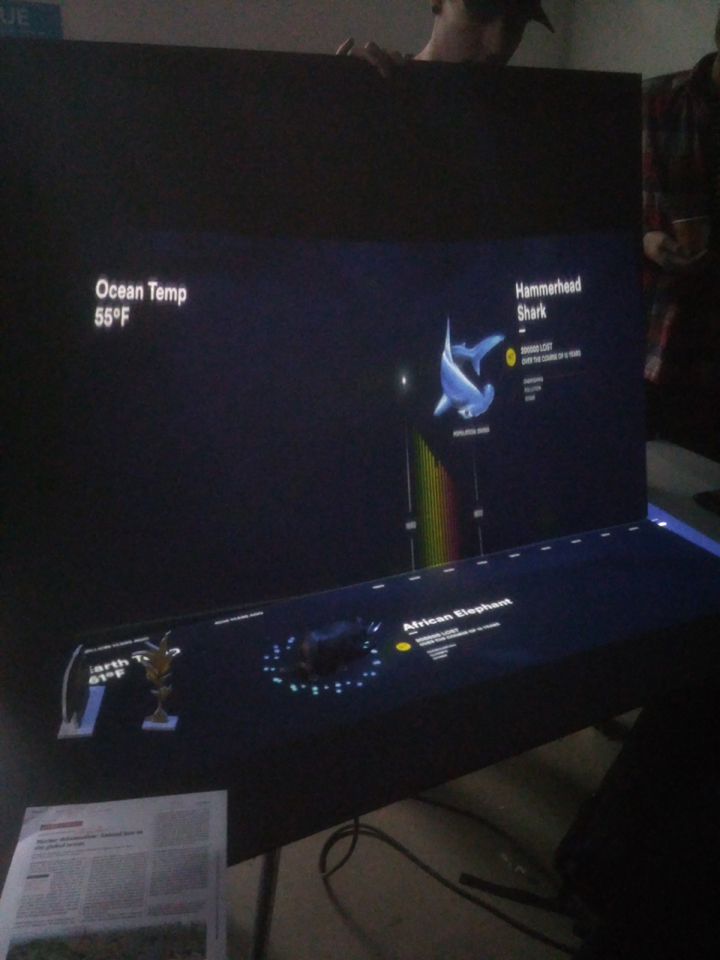 keyboard_arrow_up We added a second display for deep-diving of information 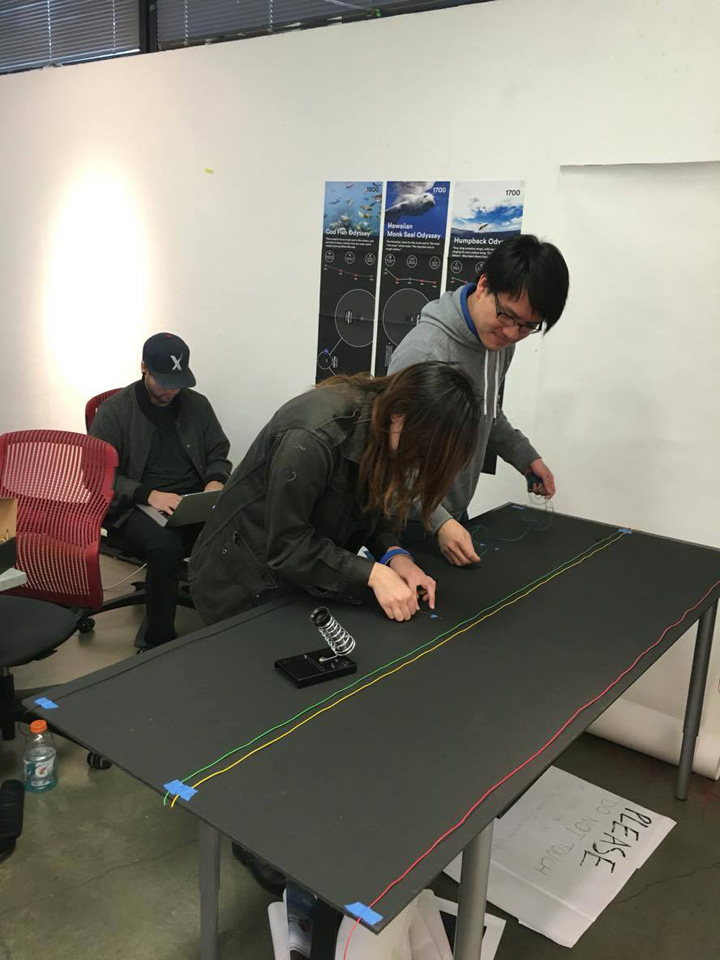 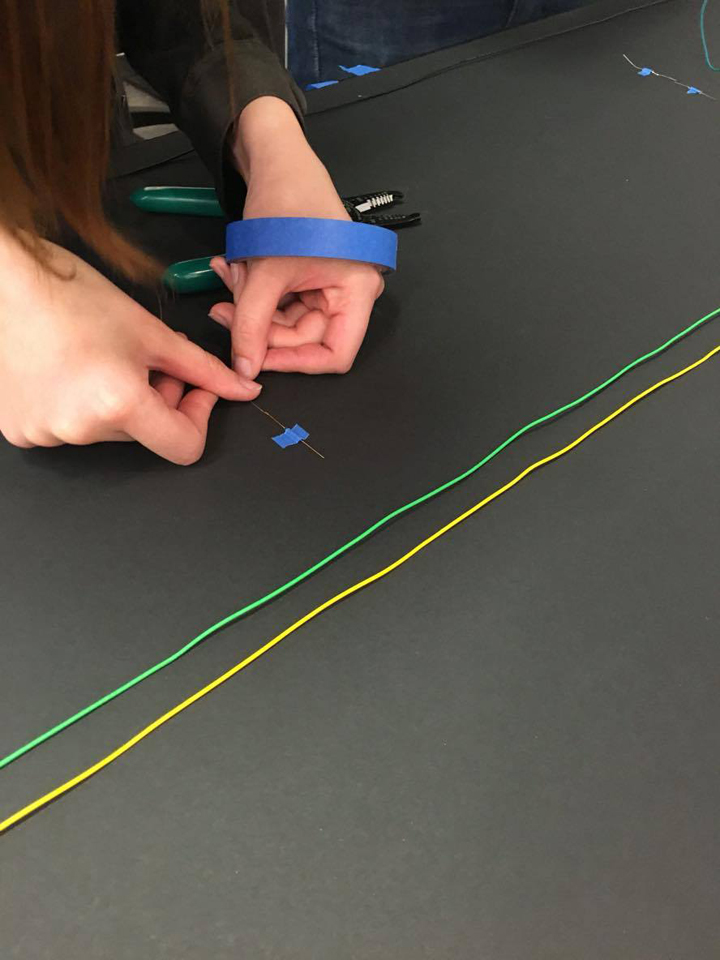 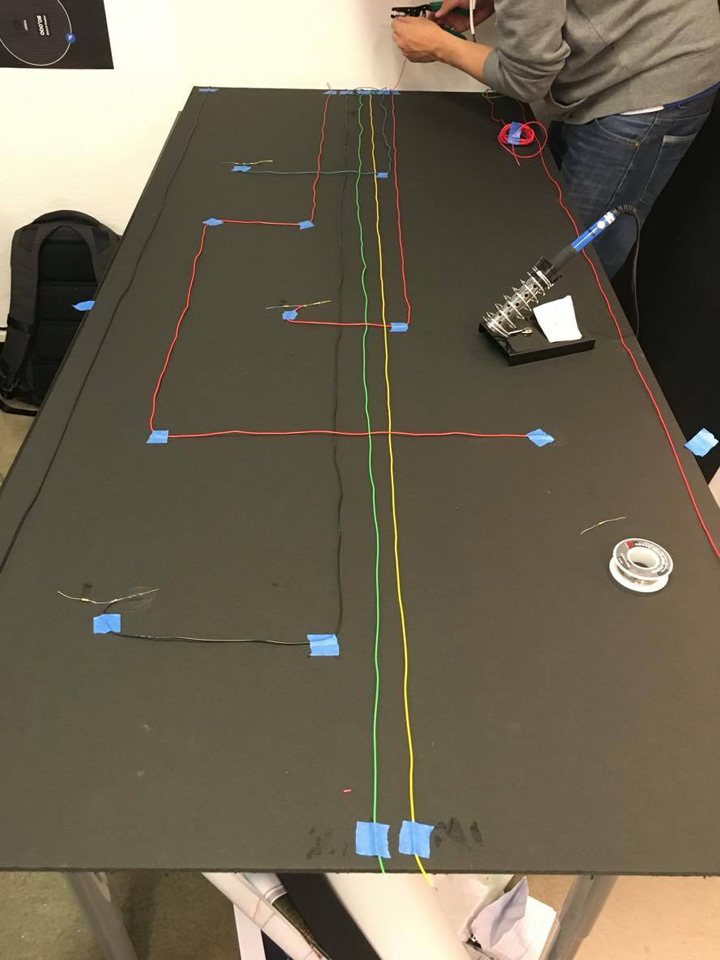 keyboard_arrow_up Together they create a network of interactive hotspots 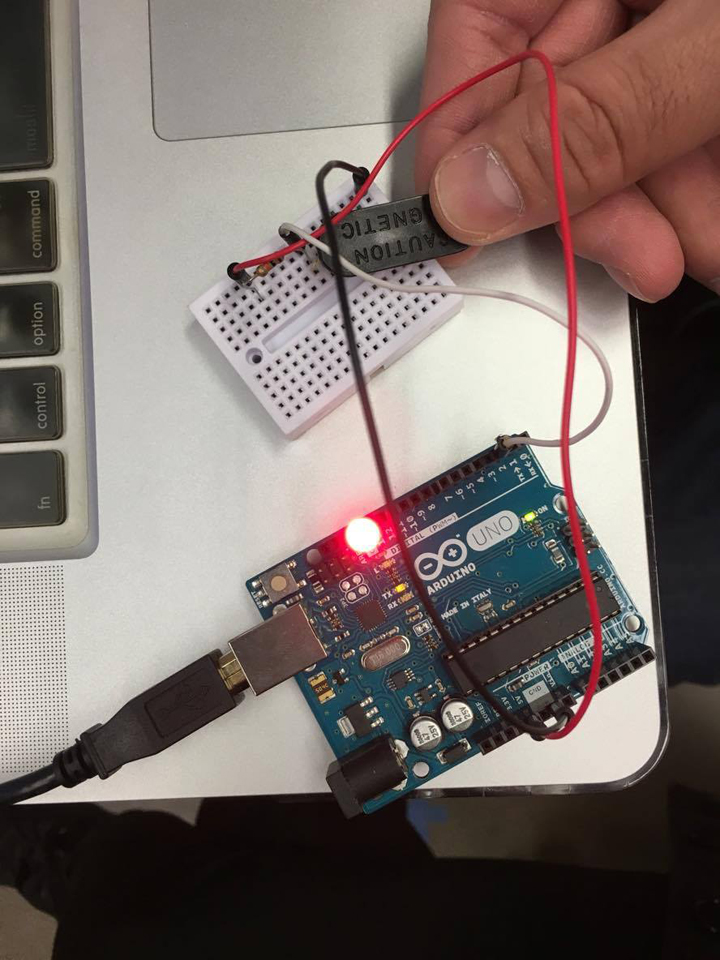 The working prototype was presented to an audience of marine scientists, geologists, exhibition designers, and city officials at the Aquarium of the Pacific in Long Beach. 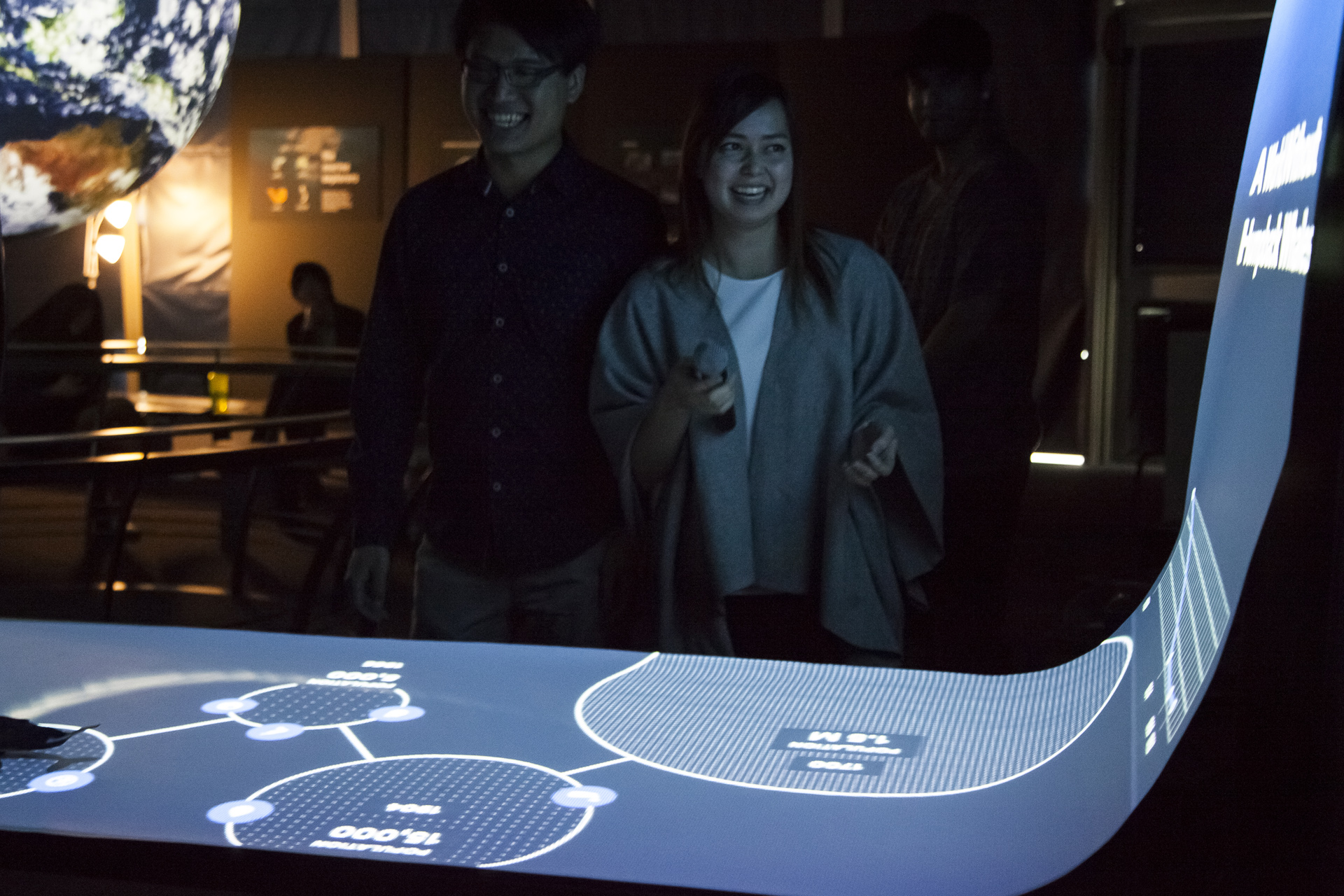 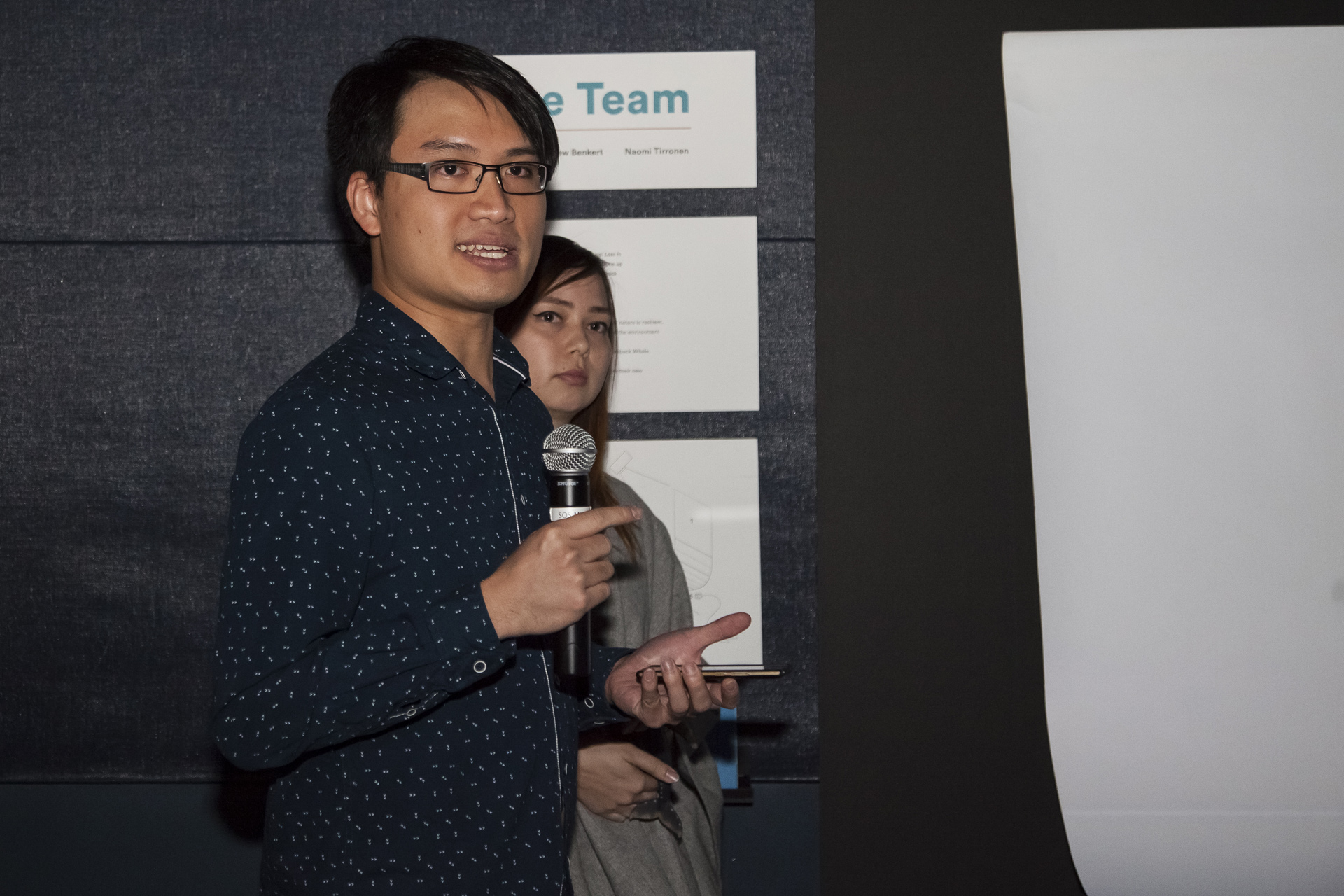 keyboard_arrow_up Me explaining our reasons behind using an object for interaction 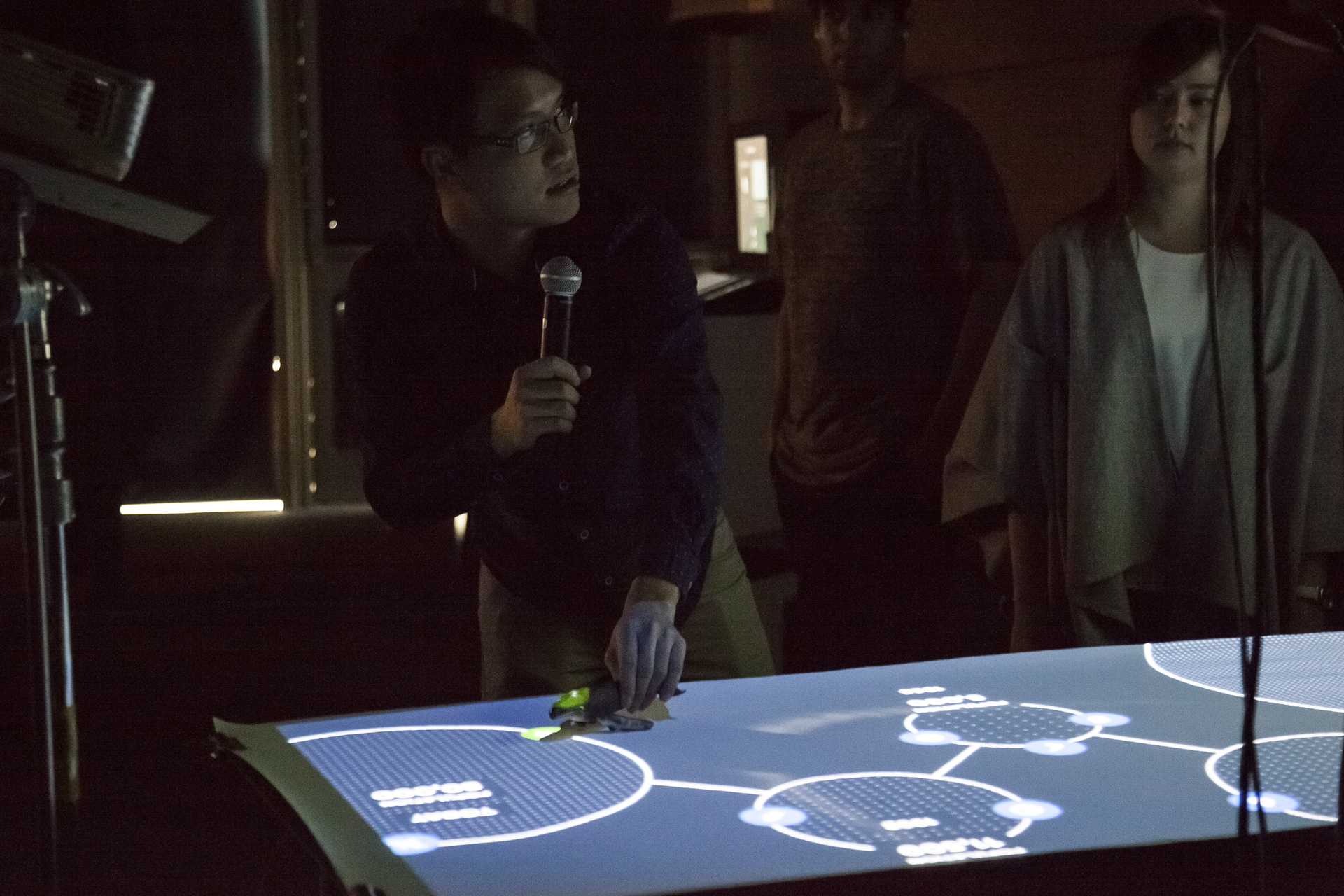 keyboard_arrow_up And going through some high-level demonstrations 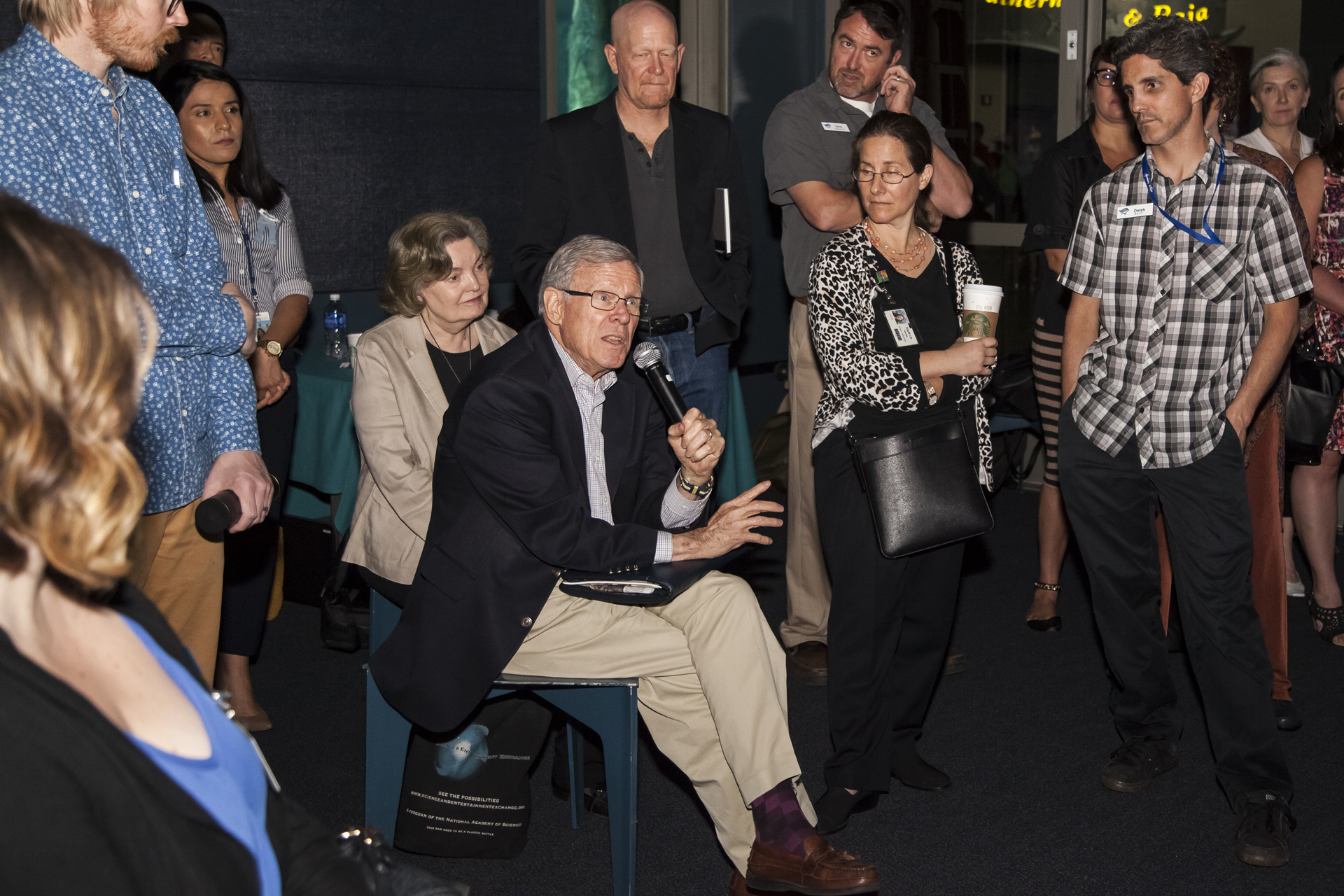 keyboard_arrow_up We got good comments from the President 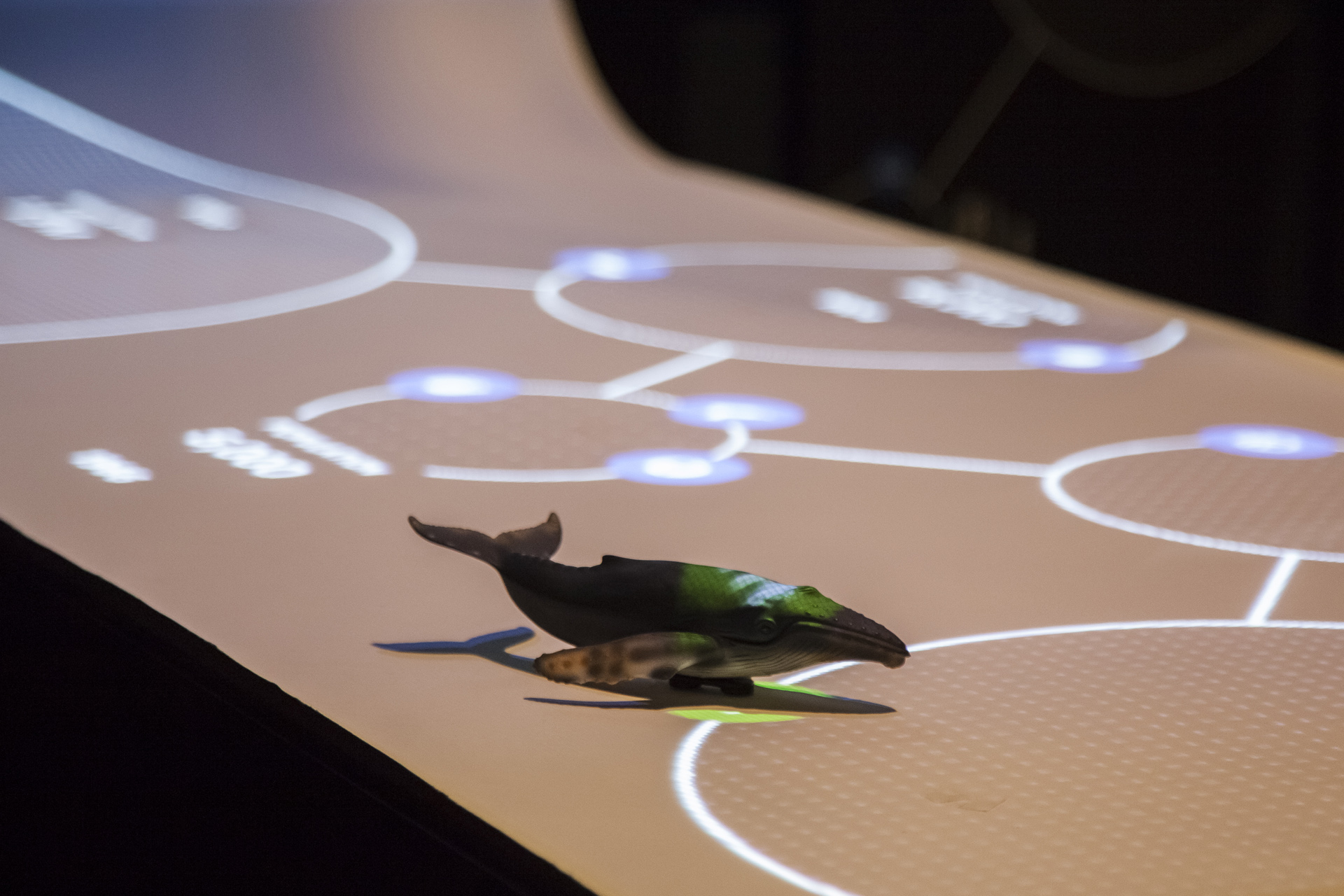 keyboard_arrow_up And the audience were genuinely interested in our design 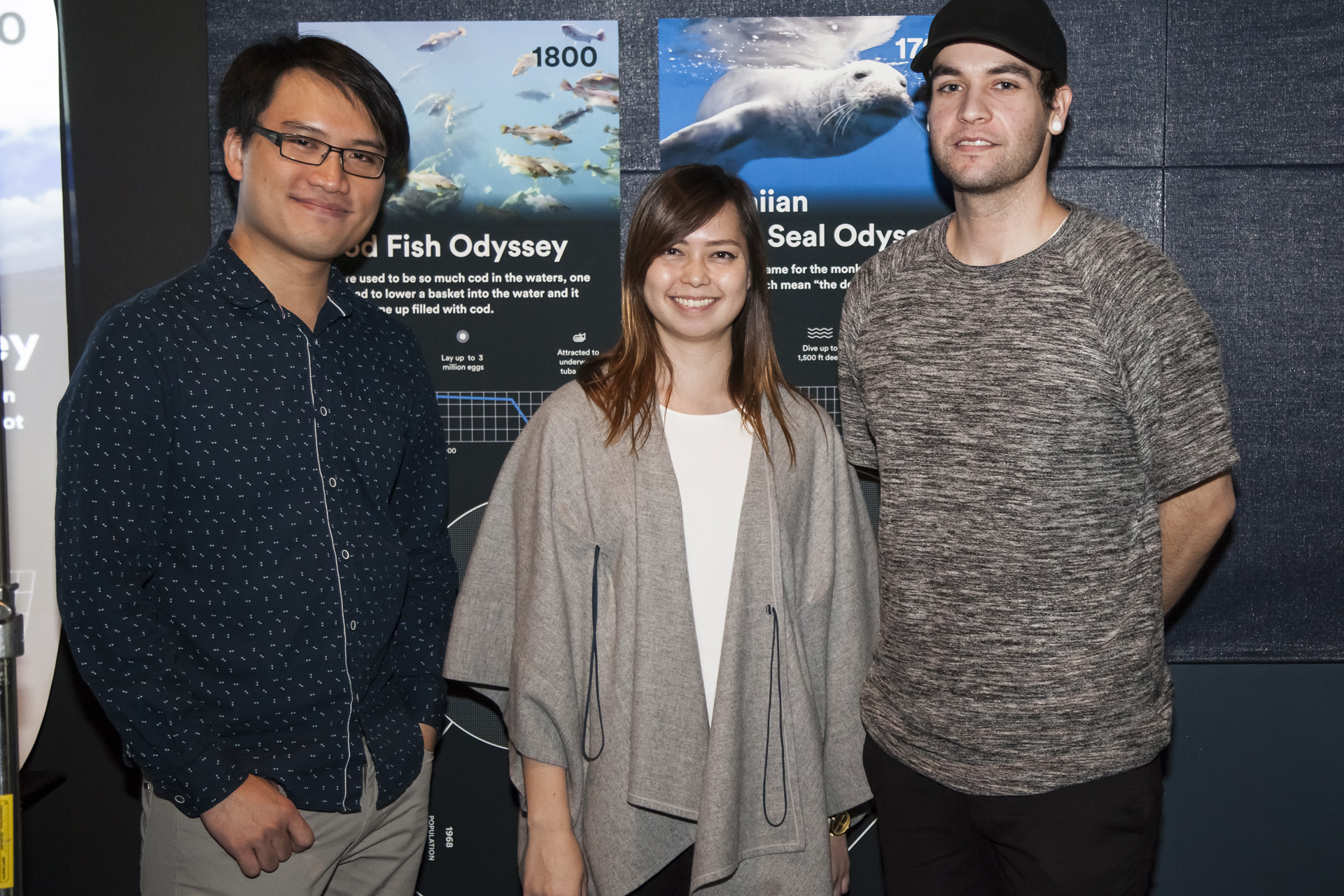 keyboard_arrow_up Our prototype performed excellently, stakeholders were pleased, and we got good feedback — SUCCESS! 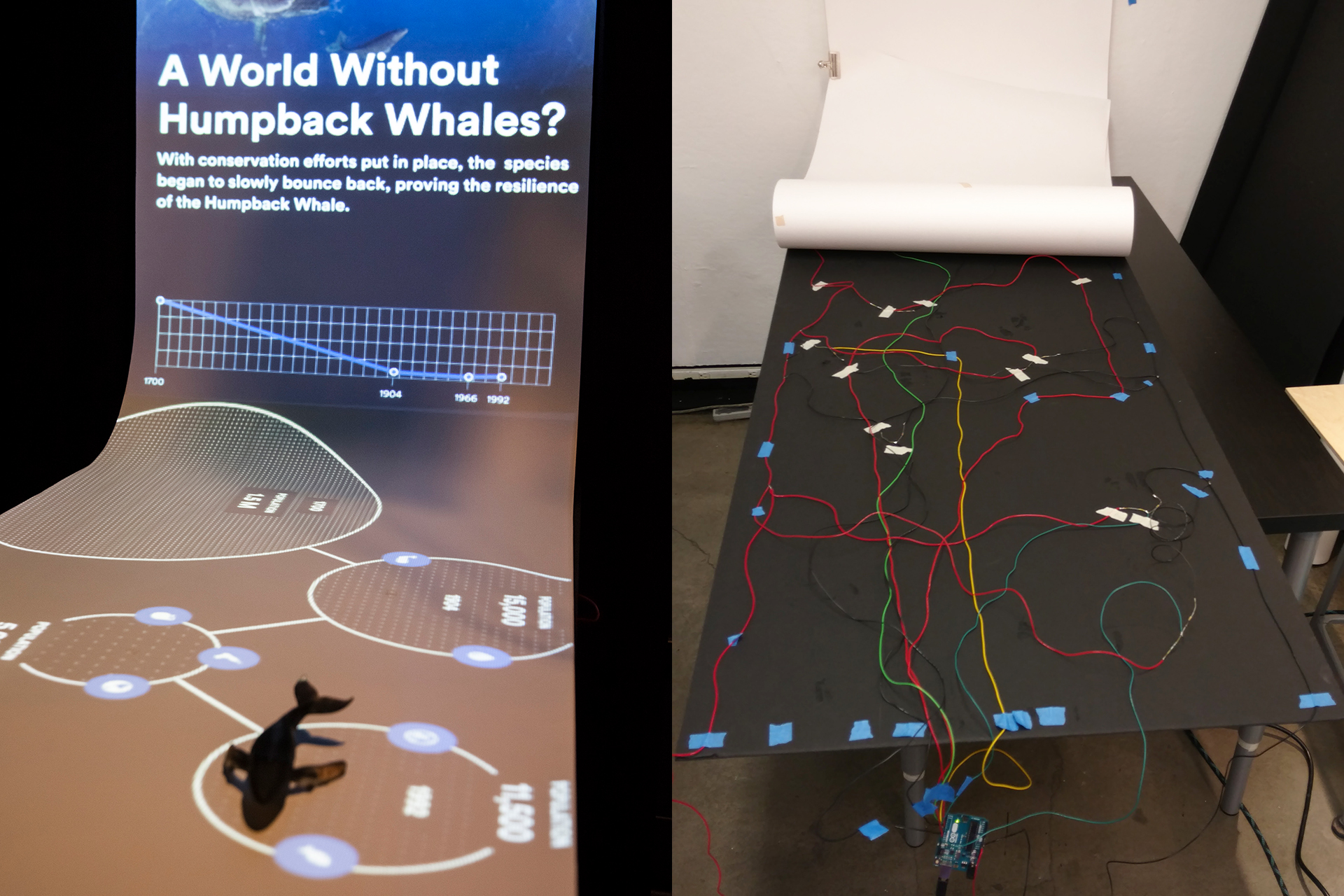 A sneak peek behind the curtains keyboard_arrow_up

What happened to Willy?

Our star of the show — Willy the humpback whale — now lives with one of our team members in her apartment in LA. 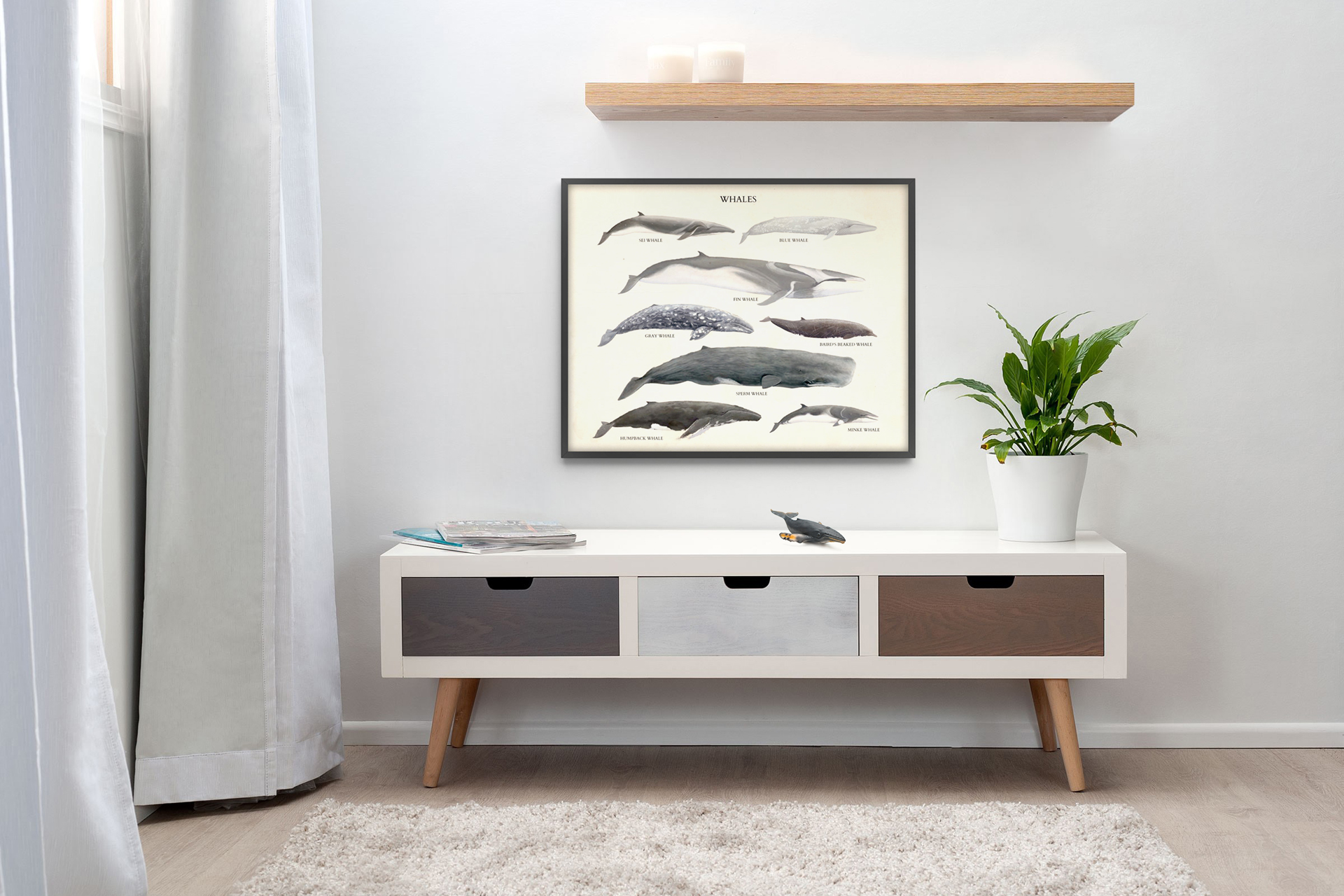